Inaugurated in 2005, the Posatora Belvedere Park stretches on the slope facing towards the sea in the eponymous district. There used to be a hospital, a university campus and a police station here, and other buildings that were swept away by a massive landslide in 1982 (the so-called “Barducci” landslide), which affected or devastated two other districts.

“Posatora” comes from the Latin “posa et ora”, meaning “put down and pray”. According to a folk tale, the angels that were carrying the Holy House, in which Mary is believed to have lived, to Loreto (where the House is located today) stopped here to rest.

The park, which is equipped with play areas for children and picnic tables, features an amphitheater and a bar and offers a spectacular view of the harbor and the old town.

Located in Capodimonte District, on top of Astagno Hill, the “Cittadella” is a Renaissance fort built in 1532 by architect Antonio da Sangallo il Giovane (1484-1546). Overlooking the city, the Cittadella hosts the eponymous park, which features military structures. Nearby, there is a dog park and the Pincio Park is a short walk away.

The park is an ideal location for those who enjoy running on hilly grounds, exercising or simply walking: you won’t even notice that you’re still in town!

Located north of Conero Park, on top of a hill overlooking the sea, in the district of Pietralacroce, Fort Altavilla was part of the second line of defense of Ancona. The fort, made with Conero stone, was designed by engineer Giuseppe Morando and built just after the Unification of Italy, between 1863 and 1866, when Ancona was fortified.

In the 1980s, after campaigns by the local communities, the fort was decommissioned, and its surroundings turned into a park.

Guided tours of the fort are part of the “Trekking Urbano” (Urban Trekking) program, an event that takes place every year around the 31st of October. An increasingly popular form of “slow tourism”, urban trekking is designed for visitors who enjoy taking their time to do things, and exercising while learning about the city landmarks.

During the Christmas holidays, the fort is the spectacular background of a living Nativity Scene organized by Pietralacroce neighborhood community. In summer, the park hosts a popular cultural festival entitled “Freedom of the People”. 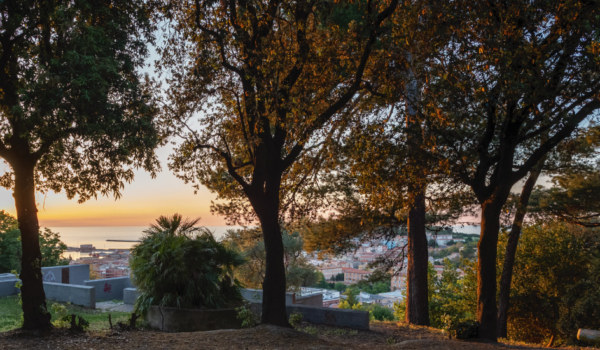 PARK OF THE PINCIO

Created in 1870, Pincio Park is the oldest park in Ancona. Located on Santo Stefano Hill, 100m above sea level, its belvedere offers a spectacular view of the surroundings. Many of the monuments and points of interest of Ancona are clearly visible: the Palazzo del Governo, the Churches of San Domenico and San Francesco alle Scale, the Cathedral of San Ciriaco, Piazza Cavour, the old port, the old lighthouse, the Jewish Cemetery and the Cassero Bastion.

The park features a monument to the Resistenza, the Italian resistance movement in World War II: a bronze sculpture by Pericle Fazzini (1913 – 1987), inaugurated on October 17th, 1965, which bears the inscription “Born from the Resistance, the Republic is proud of its origins”. The sculpture represents a man hanging by the arms from a branch of a stylized tree with human features; on the other side, a bird rests on a branch.

Rich in evergreens, the park also features a playground for children, a skating rink and a soccer field.