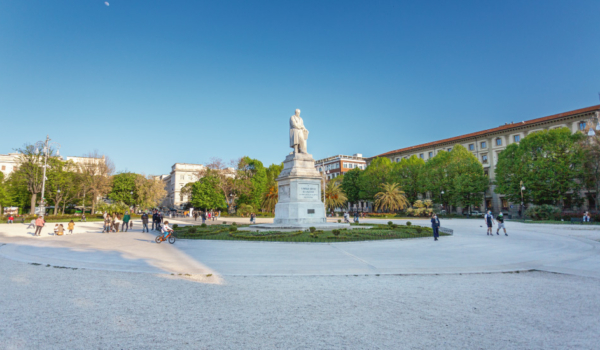 One of the four main squares in the old town of Ancona, Piazza Cavour was designed in 1862, in the wake the Unification of Italy, and inaugurated in 1868.

The square is named after Camillo Benso Conte di Cavour, one of the Founders of modern Italy. His statue, sculpted by famed Risorgimento artist Aristodemo Costoli, lies at the center of the piazza. Two bas-reliefs adorn the base of the statue, which represent the Congress of Paris and the the Proclamation of the Kingdom of Italy.

The square, which covers three hectares, was born, along with Corso Vittorio Emanuele, now Corso Giuseppe Garibaldi, with the desire to expand eastward the city, which had assumed the new role of first-class stronghold of the Kingdom of Italy.

Piazza Cavour used to be borded by walls In the walls that bordered the square opened Porta Cavour, beyond which stretched the agricultural area of the Plain of Orti. Between 1923 and 1925 this stretch of wall and the door were demolished and since then the square took on a new role, becoming a link between the historic districts and the new Adriatic District, as well as a stop along the promenade “from sea to sea”, or from the port to the coast of Passetto.

Since then, the square has always been a meeting point for all the people of Ancona. You can find refreshment sitting on the beautiful benches or stopping at one of the bars that surround the square.

On July 22, 2016, the new arrangement of the nineteenth-century part of the square was completed, which in part has been restored to its original appearance, and in part has seen the introduction of new features, such as the creation of angular lay-bys, the installation of new lighting of the two perimeter paths, the introduction of hedges to screen from outside traffic, the stone paving of the paths, originally covered with gravel. 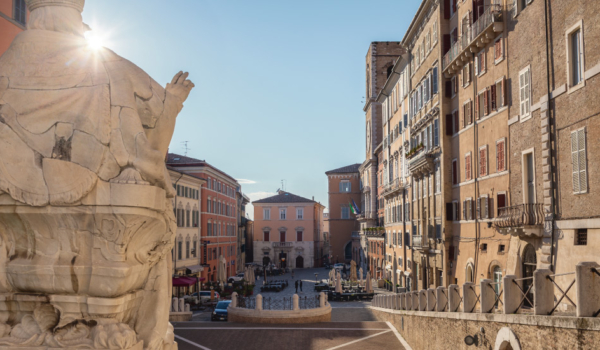 Piazza del Plebiscito is one of the oldest squares in the old town. It was called Piazza Nuova when it was first built, at the end of the 15th century, then Piazza Grande. The borders of the three old quarters – Porto, Capodimonte and San Pietro – met here. When the French conquered Italy, at the end of the 18th century, the piazza was renamed Piazza Napoleone. Locals call it Piazza del Papa, after the Baroque statue of Pope Clement XII, built by Tuscan sculptor Agostino Cornacchini.

Piazza del Plebiscito has been the backdrop for many of the cities’ important events: the execution of Pietro Grifoli, a mayor in the Middle Ages accused of treason, the foundation of the headquarters of Giovine Italia.

The piazza stands out for its peculiar shape, a long sloping rectangle, with access ramps and stairs on one side. Some of the most important monuments in Ancona are located here: the Palazzo del Governo, the Church of San Domenico and the statue of Pope Clement XII.

Lined with restaurants and bars, Piazza del Plebiscito is, still today, one of Ancona’s most bustling squares. Don’t miss the craft stores in the narrow streets that surround the piazza. 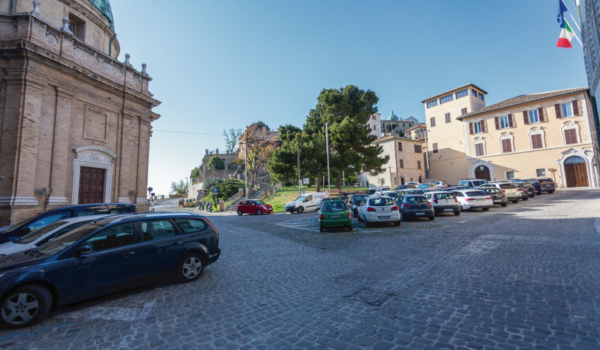 Piazza del Senato was built where buildings destroyed by bombings during World War II used to stand, such as Palazzo d’Avalos. The square is overlooked by the Palazzo del Senato, the Archiepiscopal Curia and the Church of Saints Pellegrino and Teresa, also known as Chiesa degli Scalzi, built in the 17th century. 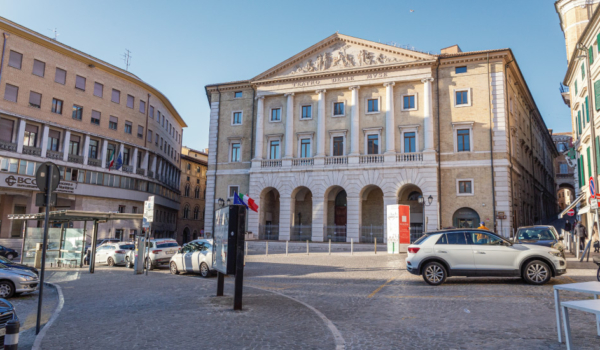 It is located in the district of San Pietro, near the port, and it features some of the most important monuments in town: the Teatro delle Muse, the Church of the Santissimo Sacramento and Palazzo Trionfi. 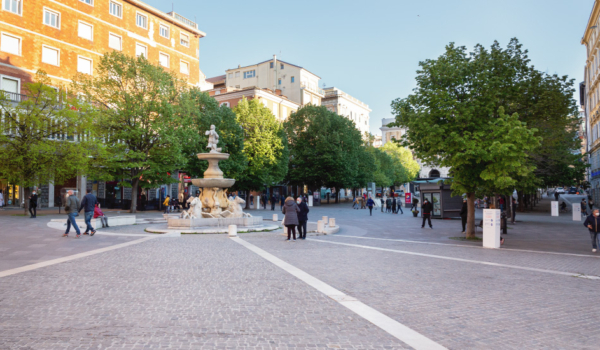 Piazza Roma, the central square of Ancona, is located between Corso Mazzini and Corso Stamira. The boundaries of the four historic districts of the city meet here: San Pietro to the north-west, Capodimonte to the south-west, the Cardeto district to the north-east and the district of Santo Stefano to the south-east.

The piazza was built after the annexation of Ancona to the Kingdom of Italy, when the 16th-century walls of the city were demolished. The city, owing to its strategic location, was made into a military stronghold and remoled after Turin.

In the north-east corner of the piazza stands Palazzo dell’Orologio, and in the south-west, the Rectorate (formerly Palazzo della Provincia). The fountain was moved to the northern end of the square, in 1908.

Named after the Church of S. Francesco alle Scale, Piazza San Francesco is one of the most peculiar squares in the old town. The piazza includes 18th century palaces worth of note, in particular, to the north stands Palazzo Ferretti di S. Francesco, one of the branches of the most important aristocrats in the city. The square was designed by Pietro Zara in the early 19th century. 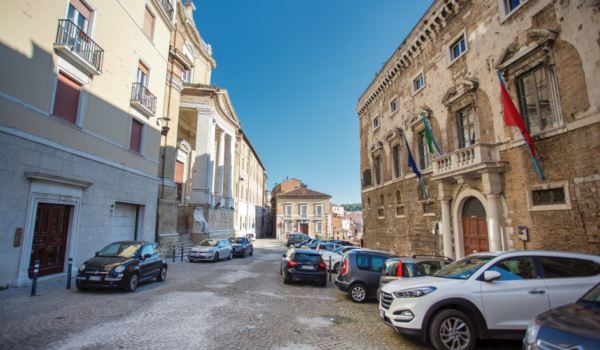 Piazza Benvenuto Stracca used to be named “flour square” because this is where grains were stored (in the wheat storages in Palazzo degli Anziani) and sold.

From the back side of the palace, which directly overlooks the sea, the view is breathtaking.

The piazza, enlarged and transformed over the centuries, features the Chiesa del Gesù, with its portico, renovated upon a pre-existing structure built by Vanvitelli.